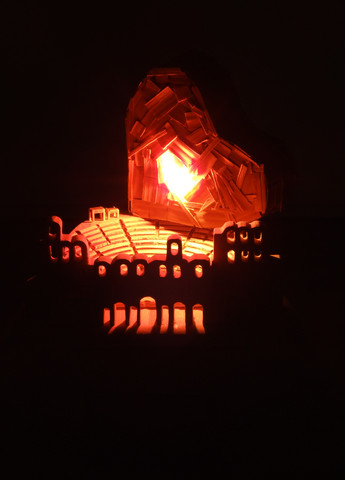 Little wooden seats and the woman of his dreams, 2006

The theme of several of Kostis Velonis’ works deals with emotions such as desire, love, failure, loneliness, loss and melancholy. In the work Little wooden seats and the woman of his dreams, 2006 the artist deals with a love story between two historical figures and creates an intensely poetic work, giving a timeless dimension to the emotions of the love story that he “narrates”. Herodes Atticus after the wrongful death of his wife Aspasia Rigillis mourned so much that he decided to honor the memory of his wife by building the “Rigillis Conservatory” later renamed “Odeon of Herodes Atticus”. Velonis creates a sound installation consisting of a model of the Conservatory, on which he places a large wooden heart that lights up the space. The red light refers to the color of passion and attributes a dramatic element to the installation. On the last stand of the theater, the artist has placed two small stools of different size that refer to the two figures of his story, but also encourage daydreaming around imaginary relationships. In the surrounding space a cover of the song The first time ever I saw your face by Ewan MacColl is heard, sung by Johnny Cash. The special, deep and bass voice of the famous American singer and composer heightens the intensity of the drama and melancholy, while simultaneously bringing to mind the lament of MacColl for the loss of his wife, to whom he had dedicated this particular song in 1957. In Velonis’ sound installation the two stories of love and grief meet each other.